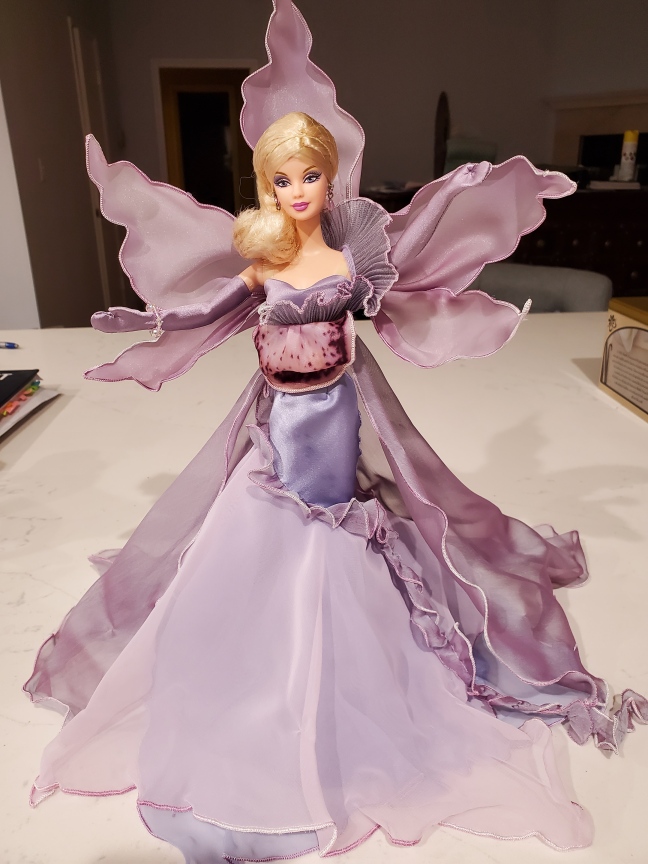 I finally decided to open The Orchid Barbie box from my long-time collection of Barbies! This week, as I was dusting my house, I saw that a few boxes of my Barbies had never been opened. Sadly, they had been sitting around collecting dust all these years.

A long time ago, I decided my collection of Barbies would be useless to me if they sit in their boxes, unopened and unplayed with. These are all Collector edition Barbies that I’ve collected for more than 20 years. I’ve opened most of my Barbie boxes and displayed the dolls in curio cabinets. If you know about collectibles, opened boxes lose their values SUBSTANTIALLY. I decided long ago it is far worth it to me to have them out to enjoy their beauty!

This Orchid Barbie is the second in the Flowers in Fashion Collection of Barbies. It was released in 2001. My husband purchased for me the whole set consisting of The Rose, The Orchid, The Calla Lily, and The Iris Barbies. In the next few weeks I will share pics of the other dolls. This one is my favorite in the collection so I am showcasing it first.

I was in awe when I pulled her completely out of the box, the dress is gorgeous and the details on it are very close to what an orchid would look like. My phone camera does not capture the beautiful purple but the picture below with flash on shows a purple close to the real thing. Decadent.

Her eye makeup is so lovely and mesmerizing.

As I was trying to put the doll on her pedal, I realized too late that the pedal stick or her legs had some oil residue (probably from when they assembled her) which got onto her dress when I pushed the pedal up her legs. So in the picture below you can see several obnoxious oil stains on the front. I was furious and was thinking it was some kind of malicious prank by the person who put that doll together or just someone’s careless mistake in not clean her before packing her up!

For now she is on my kitchen island for me to admire for a couple of days. I will unveil the Iris Barbie in a few days.

3 thoughts on “The Orchid Barbie”